Unable to login to API after update

@maarten, that is because there are no usernames or passwords for the desktop edition. There is no administrator. A few more details would be helpful.

This worked fine for ManagerDesktop

Since the update, the login window keeps reappearing.
@Tut : not entering a username does not work either. Or is there another way to access the API for managerDesktop that you know about? 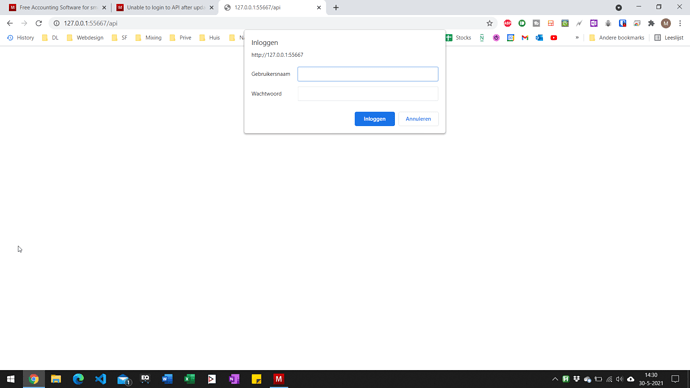 I think the expectation is that the desktop version would not support the API as the concept of an API requires network access so Server or Cloud would be the logical product to support the API in.

The desktop version is meant to be a standalone single user product not something that can be linked up to api’s etc. That would imply multi user and network/internet connectivity to the database.

If you want the api, I would recommend you get the Server edition.

Keeping in mind what dalacor said, supporting the API for desktop edition beyond this change would likely just be a case of defining a default administrator password on the desktop edition. Previously the default was to have no password.

Doing so would mean CORS can remain enabled, whilst also allowing those on the desktop edition to access the API.

My use case for API with desktop edition is for testing purposes. It’s my development environment & I need a local place to test my integration without hitting a web endpoint or production directly.

This is definitely a regression in functionality. Likely a bug as well, though I’d be keen to hear @lubos’ thoughts. I’d strongly prefer that it still be available, at least in a capacity that can be used for local integration testing.

If api access is being dropped from the Desktop version, I guess I wont be upgrading past 21.5.34.

So here’s a workaround for those who may want to continue to use the desktop Edition as an api development environment or for other api purposes.

You need to have a Manager Desktop version installed that still has api access. For Linux, the latest one is at Release Manager 21.5.34 · Manager-io/Manager.AppImage · GitHub

If Manager complains when you go to open your business file (xxxxx.manager), you need to rollback the version embedded in the business file.

To do this, run the following command in a terminal (you may need to install sqlite3 first):

This will rollback your xxxxx.manager business file so it is able to be opened with 21.5.34.

It does makes a (small) change to your business file, so be sure to back it up first.

Hopefully this will only be needed in the short term.

Manager API will continue to be supported in desktop edition.

Glad to hear it.

Not sure why it works that way. There’s no authentication at all, so why would there be on the api portion? That will improve nothing in terms of security. Manager listens on localhost, which is fine.

Because the API is a server function which is not disabled in the free desktop version.

A simple solution would be to disable it in the desktop version. Either that or desktop users should be thankful it still available for them for free

To get my stuff working again locally I could launch server edition temporarily as you suggest, but that doesn’t solve the problem for others.

I am wondering if there was a change to fix this between June 2nd (when you wrote that) and today.

Desktop edition does not have any authorizations so no passwords. The advice provided in this discussion remains as is, ie locally install server edition.

Is this available? I don’t have a server version does this work with the cloud version?

The cloud version is the same as the server version. API access is available in both, only not in the desktop version. Add /api to your cloud version URL and login with your username and password.

@eko Thanks, I was going to do some experiments before subscribing to the cloud version. I thought it still works because of what @sharpdrivetek said.

As mentioned if you have cloud version it will work with adding /api to the url and use your cloud version username and password.