Hey there, first of all, complements for this piece of software. Its great. I have the following question.
Is there any code available (with example) for showing the subtotal (“grondslag” in Dutch) for each tax code in the invoice templates. I have made my own custom sales invoice template, but this issue i struggling with it. I used both BTW (TAX) codes for The Netherlands, and my prices are BTW included.
This is what i want to realize:
TOTAAL TE BETALEN: € 234,30
Inclusief BTW 21% over € xx,xx € 4,98
Inclusief BTW 6% over € xx,xx € 11,63

You have to specify the BTW per product, works great.

I think you don’t understand my question. Of corse, i have specified The BTW per product. On my invoices has each line the BTW code at the end. Some products are 6% incl., others 21% incl.
Under the Total Amount (Totaal te betalen) are the both TAX codes (BTW bedragen) specified. My question is, is there any possibility to show or to calculate the Subtotals for each TAX code on the invoice. For better example: 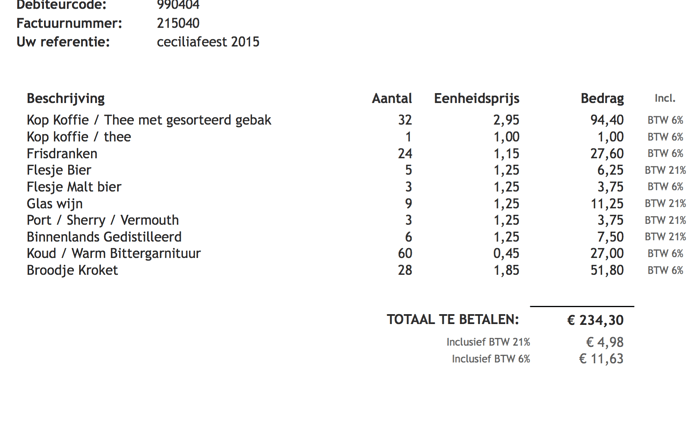 I don’t have experience with Dutch built-in tax code, but if you create a custom tax code with multiple elements, each element shows separately on the invoice. Is that what you want?

Thanks for your answers, but this is not what i mean or want. First off all, Manager is a great accounting program, with all that possibilities where i was looking for a long time. Accounting, invoicing with products list and a good TAX system with prices include or exclude TAX. Nothing than complements to the developer(s). I think that my “problem” (or whish) is more a invoice templete issue is, or the missing of the knowledge of liquid programming on my part…
Whit regards…

Why bother with custom HTML template if default look can do it? 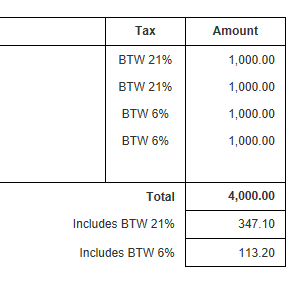 @Richard, why make your invoices more complicated? Is this legal requirement to show BTW-exclusive amounts too?

@lubos, there are two reasons for my to show BTW- exclusive amounts for both Dutch TAX-codes.
1: indeed its legal require and a necessitated for Dutch Invoices. See the site of the Dutch tax authorities: Aan welke eisen moeten facturen voldoen voor uw btw-administratie?
Free translated the part of this issue: “the amount you charge , excluding VAT.
Delivers performance with different rates of VAT ? Please indicate the individual amounts”.
2. Almost every accounting program is based on accounting with amounts exclude VAT. This is one of the reasons why i find Manager so great. It’s possible to accounting include or exclude VAT. When your business deliver goods in one VAT rate, its not difficult to calculate the amount of the bill excludes VAT. But in my case, both VAT rates are used, so my customers must calculate first all goods with the one rate, and then calculating the other.
I have always shows on my invoices the total amount includes VAT, and then specify the VAT. This is the only part of templeting where i struggle with, and my question was of this is possible in Managers templating part. Thats all. Thanks for all the good work. Richard
Example of part of my invoices, used in 2004 till 2015.

If it’s true what you are saying and Dutch invoices must show VAT-exclusive totals too, then I don’t mind making default invoice template to show them. That way you can avoid making custom HTML template, right?

What I need is some sort of confirmation that is the case from other Dutch users. Because this is the first time I hear about this and other countries don’t have this requirement.

It is indeed the case that Dutch law says that you have to show on the invoice per VAT-code, the total amount excl VAT on which each code has calculated the VAT.
The example Richard showed a day ago (in grey) is indeed that what is required.

I guess its not such a big issue for people that only use one VAT-code on an invoice. If you start mixting multiple VAT codes this becomes a legal requirement.

Although the majority has to deal with one VAT-code (21%) for Richard it is an issue because he has to deal with two codes and in that case it is a relevant issue and a legal requirement.and that is what counts.

Thanks @Hennie and @patrickdewit for your confirmation. Thanks @lubos for your time and energie you put in this project. I appreciate if you can make it possible for the Dutch users, to show the exclusive-TAX amount on invoices, or can tell us how we can insert any right code in the custom HTML template.
With regards, Richard

I agree with Richard, Manager is a very good program.
But…
there is another question about VAT (BTW) in Manager.
In the VAT Calculation Worksheet: The totals at 1a - 4b (Bedrag waarover omzetbelasting wordt berekend) are shown included VAT; for example: 1a Leveringen belast met hoog tarief 25.000,00. We have to give these amounts exclusive BTW and rounded off down (20.661) This concerns also the amounts of VAT (Omzetbelasting) These are also shown exactly, for example: 4.338,84 We have to give these rounded off down: (4.338)
The amount at 5b Voorbelasting we have to give rounded off up, for example 2.222,22 becomes 2.223
I should very appreciate it if you could modify the template in this way.
The slogan of the Dutch tax authorities is: We can’t make it easier. I’m sure that not every Dutch taxpayer thinks the same.

If you use both tax codes (BTW 6% & BTW 21%) on sales invoice with tax-inclusive amounts, you will see tax-exclusive total per each tax code.

@lubos, Thanks for added tax-exclusive totals per each tax code. But, Its only works when i don’t use any invoices template. When i create a new view template, and don’t make any editing, save the standard template whit a name, i lose the translation to Dutch, and the tax exclusive per each tax code. Do you have a reason for the fact that these new futures only works in the “standard” invoice template, which i think its different than the customizable invoice template. So, can i used the code for tax-exclusive totals in my own templates, and if so, what is the code for that.
With Regards, Richard

Custom HTML template shows whatever is in it. Also, the sample template there is just an example.

Why do you want to use custom HTML template anyway? Why not stick to default look?

I understand. I forgot the many languish and country specific adjustments. Thanks