Can you provide a link to official documentation of the change so @lubos can verify before adding the new tax code?

The Dutch government has expressed the intention to raise the lower VAT-rate from 6 to 9% per January 1, 2019. Mid-September the 2019 budget will be presented and the next steps are that laws needs to be changed and approved by the House of Parliament. So quite a long time to go before it is official and as usual in the Netherlands with tax-legislation, it will be five minutes before twelve that everything is settled.
I will keep Lubos informed about this subject.

Hi there,
Any update on this? Year end is here sooner than you realize

Kind regards and thanks. 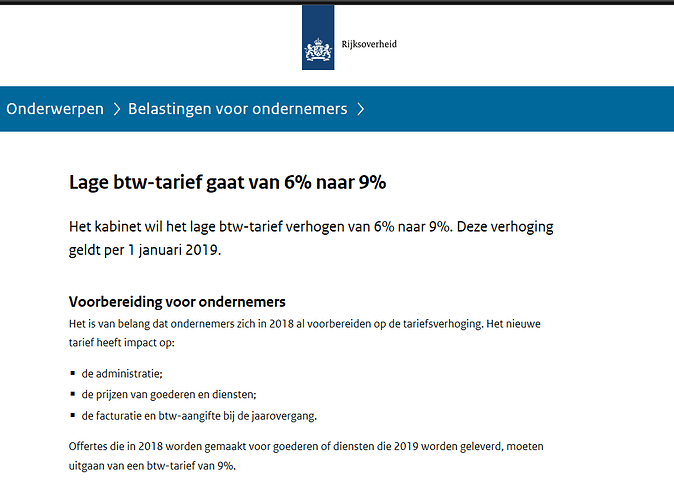 I will implement solution next month. There is some work I’m planning to do on tax codes in general and the way tax codes are added will be a bit different.

I just downloaded the latest release of manager and mentioned that there is no 9% standard VAT rate for The Netherlands. Is there a standard rate coming soon or should I create a manual code?

On December 19 I have send @Lubos a private message with official documentary that the change in the VAT law is now approved by the House of Parliament and the House of Lords and that the lower rate of 6% will be raised to 9% per January 1.
Lubos promised that by the end of December the new rates will be available in Manager and that the “Concept BTW-aangifte” will also include the new rate.
Warning: when you create new rates yourselves, they will not be included in the “Concept BTW-aangifte”.
So please have some patience. I trust that Lubos will have this settled in time.

Thanks for letting us know.