Reconciliation is not working

It shows that bank account is rec to statement, but it is not: 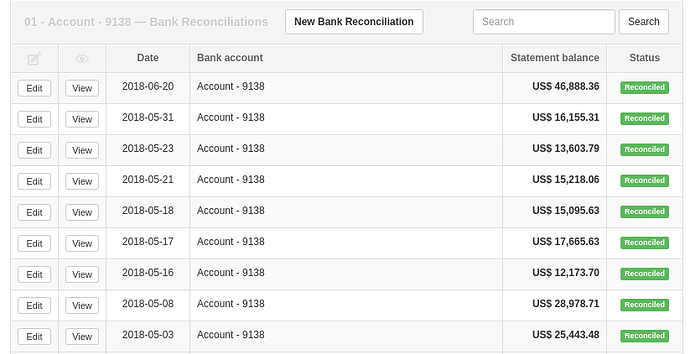 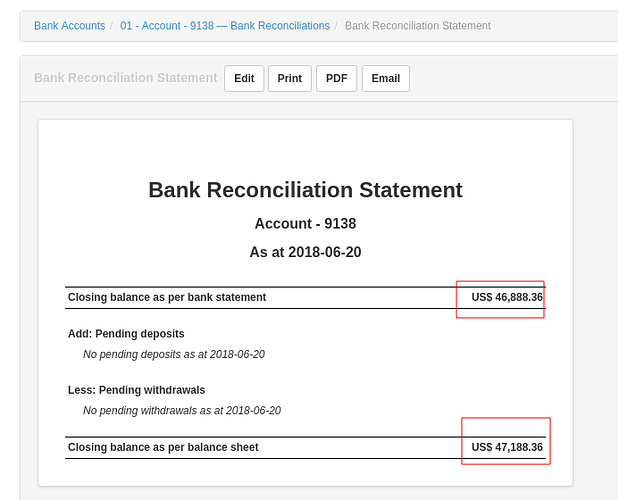 So something is not right here.

Perhaps posting the bank transactions would help analysing the problem?

Also what version are you using - desktop, cloud, server and version number?

everything is ok in the beginning: 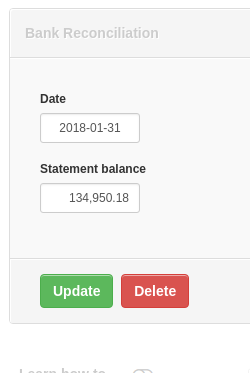 following after that recon. of 2-28 becomes unrec :

Also what version are you using - desktop, cloud, server and version number?

but do not furnish any information

What particular information you need for that?

Perhaps posting the bank transactions would help analysing the problem?

I do not get you here

I cannot reproduce this problem, whether the account has pending transactions or not.

@Solnce, when you play around with prior reconciliation statements, you are not changing the underlying transactions. Reconciliation statements are just reports. They can be deleted and recreated. But more goes into them than you see or can edit. So it is almost impossible to diagnose problems remotely, without being able to examine every historical transaction in the account.

If you have a problem with a specific reconciliation statement for a certain date, I suggest you delete it and create a new one. Let us know if that fixes the issue.

Or ask yourself whether you need to keep that statement at all. Manager was recently changed so it displays more reconciliation events than it used to, or even than you knew were there. If your most recent statement reconciles, the account is reconciled, no matter what happened in the past or what prior reports showed.

I do not understand you, so explain me please.
If balance I’ve entered into rec. tool matches account balance for given period, tool’s indicator must be green, show [Reconciled] and produce the report where entered balance = statement balance.

If balance I’ve entered into rec. tool mismatches account balance for given period, tools indicator must be red, show [Not reconciled] and produce list with transaction for analysis.

Is that correct? If yes, then is that correct despite all any other circumstances or this depends on something else? Is that why you need “to examine every historical transaction in the account”?

What I tried to convey is that when you go back and edit information in a report, you are not editing the bank transactions, so the underlying conditions do not change. To change those, you must edit the transactions (which you can do during the reconciliation process). So your attempts to explore and illustrate your problem by changing report parameters really do not help you make progress.

That is why I suggested deleting the report and recreating it. Have you tried that? What was the result?

Have you tried that?

No, because why should I do that? Balances entered are correct - as in paper bank statement, I will not enter anything different, bank transactions are also in place, so why I should have different result by deleting and re-entering ending balances? Program has got enough data to tell me if it is rec or not, so why it is not able to provide me with correct answer? Why I need to re enter what is already entered to see something different? I have posted two images where a) there is mismatch with the bank statement and program indicates that it is [Reconciled], although there is even mismatch seen in report and b) there is a match with balance I’ve entered, but it is being reported as [Not Reconciled]. This is absolutely opposite to what it suppose to show.

I clearly see that are big problems with this tool, it is not functioning as it suppose to and despite of what complexity it is and how many processes lay beneath it, if it balances match then they match and software has to indicate that properly, not me has to delete/re-enter to achieve correct result. I am using software and expect it to help me, not me has to help the software to do something.

I do not know how to re create the situation, I cannot tell exactly what happened and when it happened. I just have noticed that after one of updates there appeared many rec lines that I haven’t created (I do only monthly rec), but because, accounts were rec. and the indicator was always green [Reconciled], I did not care (yes, all those green in first image mismatch with balances entered, but are in green anyway).

On the other hand if you say that this can be solved by deleting and re entering, there is probably no point of trying to re create situation.

No, because why should I do that?

For the reason that I already explained: the reconciliation process is complex and you cannot see or edit everything involved in it. Your comment that after an update there were suddenly reconciliation reports you never entered is one indication of that complexity. Those reconciliations were always there. They just were not displayed.

Obviously, the fact that a report shows as reconciled when it is not means something is wrong somewhere. Since you’ve been experimenting with the reconciliation inputs, that could be the cause. So deleting the reconciliation statement and starting over might fix it. I don’t know if it will, because I don’t know what’s causing the error.

There have been updates in the past that caused problems with prior reconciliations. The solution was to delete and recreate them.

I don’t mean to seem rude, but if you won’t try the fixes suggested to you, why ask for help? No one else has complained about the problem you are reporting, and I haven’t been able to reproduce it. So there is apparently something you have done that triggered it. It doesn’t necessarily have to be something recent. It could be an old problem that was obscured before the update added more visibility to past reconciliations.

Since you’ve been experimenting

I was not experimenting, I have noticed that accidentally and then decided to check if the rec tool is working. I do not even know what to do to recreate the situation and what [Rec] and [Not Rec] currently are indicating.

There have been updates in the past that caused problems with prior reconciliations.

One things is to delete rec. as part of leftovers from previous buggy updates, the other is to suggest it as part of regular work flow if you notice something unusual. You did not told about possible problems with previous updates. Anyway, to ask regular user to re enter the same date is bad practice in software development, machine should deal with that.

Anyway, that did not work, entering the same balance gives both times wrong result.

why ask for help?

I cannot use Manager for numerous reasons as main program, I use it just for some occasions, but I feel that it is good thing to report any abnormal behaviour whenever I see it, because others can be affected too.

the other is to suggest it as part of regular work flow if you notice something unusual.

I did not suggest it as part of the regular workflow. You are the only one so far who has complained about this. So I suggested something that might fix your problem.

You did not told about possible problems with previous updates.

I have no way of knowing if they might have been related, so there was no point in describing them. I only know that deleting the reconciliation statement as re-entering it fixed the problem.

I cannot use Manager for numerous reasons as main program, I use it just for some occasions,

And not keeping all your records on Manager might be the source of your problems.

Please, can you, after going back and forth, explain me, what
[Reconciled]
and
[Not Reconciled] mean? What are these indicating?

It always used to be match/mismatch with balance entered, but I see that not anymore, so what it shows now?

Also, one of the situations is already described, it is reproducible - do rec for few months (jan-may for instance) and change entered balance for Jan, this will produce [Not Reconciled] for Jan and Feb, although Feb was intact and has got matching balance. Without going into deep discussion about “underlying processes” - is that how this program should work?

The two terms mean exactly what you think they mean. I have never said that they do not, and I have agreed in several posts that you have a problem, because the statement balance does not match Manager’s balance, yet the report says they are reconciled.

Please understand, I do not know exactly what the reconciliation process includes or how it works. I only know that when problems with reconciliation statements have occurred in the past because of updates, they could be fixed by deleting the statement and recreating it.

do rec for few months (jan-may for instance) and change entered balance for Jan, this will produce [Not Reconciled] for Jan and Feb, although Feb was intact and has got matching balance.

And why would things not change? You’ve told the program that a balance at the end of January was different from the information it had previously. Honestly, I’m surprised all subsequent statements were not affected. But I have no insight into what transactions were entered into the account.

is that how this program should work?

I can’t tell, for the reason already mentioned above. Reconciliation is, in my opinion, the most obscure aspect of the program. All I can tell you is that it works for me, and my efforts to duplicate your problem have not revealed anything wrong.