There seems to be a glitch in the G/L transaction report. The foreign currency accounts are not tying out to the general ledger summary and the trial balances. I have a USD reporting currency and those amounts are fine but the EUR and AUD accounts are generating amounts that don’t tie to either of the G/L summary or the trial balance. I’ve never had issues before, any ideas? Thanks!

As background, our functional currency is USD and we have foreign currency accounts in AUD and EUR. As our holdings are based in the Netherlands, we use the ECB (European Central Bank) foreign exchange rates.

We were sending some reports to an outside advisor when this came to light. Seems that its new as we’ve never had this problem before (user since 2016).

I’m using a euro intercompany account as an example;

Attached screen shot of the of the General Ledger Transactions summary USD 164,358.13 – no idea where these amounts (rates) are coming from and why it doesn’t tie out to the G/L summary

As we have a 30 June year end, it’s a bit urgent so thanks for your help! 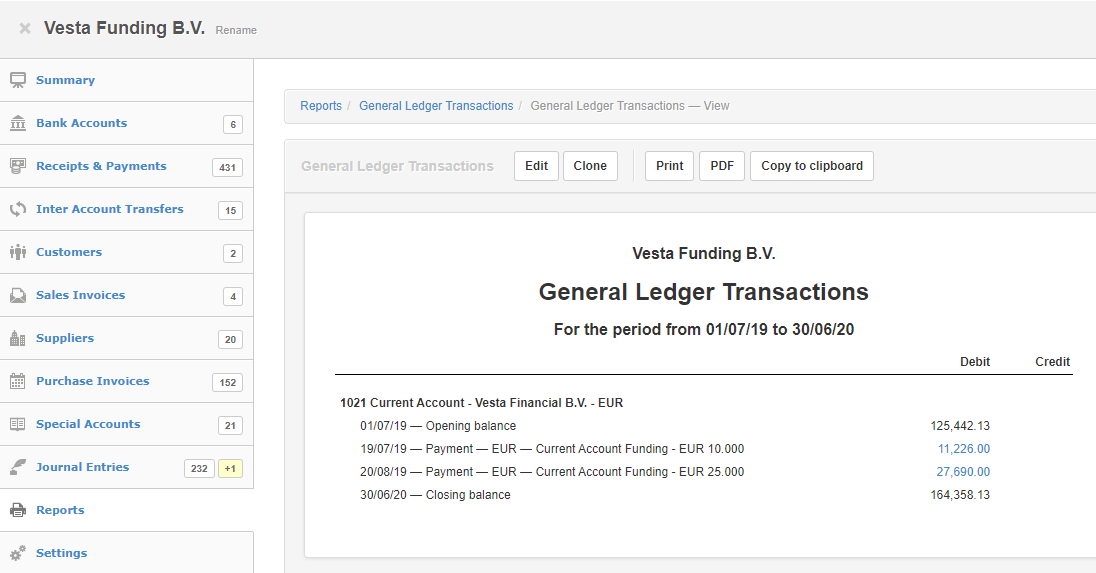 You should not publish your personal details - I would delete them

I will use the terminology as used in Manager

Presumably you have setup your base currency as USD

When you report your balance sheet accounts, the Euro balances are converted using the exchange rate active on the Balance Sheet date

What exchange rates have you entered for EUR/USD

If the transaction only has one line, then this will not happen

I see what’s happened, you’ve changed the way the forex is calculating! It now calculates once on the date of the transaction and does not keep updating that transaction when a later exchange rate is added (as it previously did). This is excellent for the historic purposes but it doesn’t properly reflect closing value. If you can set up a system where the user can schedule a foreign currency calculation on a specific date so the balance recalculates on that date, the problem would be solved.

I’ve attached the 2016 general transaction report (removing all personal info) from another software system showing the transaction currency and amount (in the currency) on the right and the functional currency (USD) translated amounts to the left. The user can generate an automatic foreign currency calculation on whatever date they wish (in the this case 31 December and 30 June so the G/L transaction report agrees to the trial balance as of whatever date the user requires. This report also shows the balances in the foreign and functional currency which provides the audit trail most companies need.