Indeed, so there’s no problem with the AppImage.

Or there is a conflict with another application, and you either don’t have it installed or you just haven’t gotten an update yet for it?

I have the exact same issue on Fedora 35. Has anyone found the fix yet?

I think you have the same bug with gtk3 as manjaro or arch user. Downgrade the Package, is the fix

Appimage does not work, crashes

@hanny so the app does not crash on startup. It crashes when you click on business name within Manager. Is that correct? In that case, something would be wrong in relation to SQLite library. There are many Linux distributions. Typically, if AppImage works on Ubuntu and Fedora, I just assume it’s good enough since that should cover over 50% Linux desktop users. Can you try if you can get free trial of Server edition going? If not, at least you should be able to see some error in console. That w…

That was indeed the problem. Thanks!

I fixed it on fedora 35 temporarily with the following command:

In Archlinux downgrade to the last version of gtk3 that works with this command:

I have been having an issue with manager (new install) on both Fedora 35 and Manjaro KDE and Gnome (ver 21.1) and it starts but crashes when clicking on a business (either imported or new). Followed the above mentioned ‘fixes’ but doesn’t do anything. Any suggestions?

Make sure to lock the version of gtk3, so that it doesn’t get changed again when running an update. With fedora you can use the versionlock command:

I haven’t tested it so far. If you do test it, let me know if it works for you.

Hello again, i little bit late sorry,
i tested it after the big update from manjaro, and it breaks manager accounting again.
Also downgrade the Version gtk3-0:24.30-60+… without tracker again.

Downgrading gtk worked for me too. Fedora 35

Does anyone know how to officially report this as a bug somewhere, such that it can be fixed? I’d like to have this fixed, since I still have this issue.

This is still a problem. I hate staying so far back on GTK. How can we find more information to get this fixed? Are there logs I might be overlooking?

I hate staying so far back on GTK.

Actually gtk3 which is part of for example Ubuntu 20.04 TLS would be supported to at least 2025. If you Google a lot of people are complaining about the April 2022 release of the next TLS version, i.e. 22.04 TLS version and I would advise to wait at least a year until this version has become better.

Is there an older version of manager to run on manjaro 21.3.7 (upgraded from previous versions) or a linux distribution that runs manager-accounting without any issues? I have installed gtk3-0:24.30-60+ as usual, but this version of manager is crashing on opening a business (imported backup) or even a newly created business. I’ve never had any issues like this before, and don’t know how to get a log file to see what the issue is for this application. Also, my KDE version is 5.25.5.

Anyone has a suggestion?

linux distribution that runs manager-accounting without any issues

Ubuntu is not an option for me or my business. Why does this software only run on ‘old’ versions of linux? Should they not update the software to accommodate newer linux versions?

I disagree that Ubuntu 20.04 TLS is “old”. It is supported to 2025. Only in April this year they released a new version and lots of users have problems. Only when resolved it would matter.

If related to gtk3, I agree, gtk4 should be supported by now. However, you can run Manager as long as you also have gtk3 installed

I also noted that you use Manjaro and not Ubuntu or fedora as recommended for the server and desktop edition so your argument does not hold as both of those will function with Manager,

or a linux distribution that runs manager-accounting without any issues?

I am confused because this statement contradicts with:

Ubuntu is not an option for me or my business.

I can assure you that if properly installed Ubuntu 20.04 TLS works out of the box with Manager as your first statement refers to. 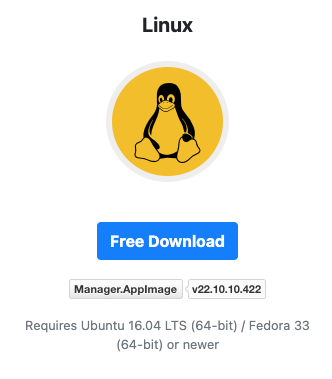 Manjaro is more tailored to desktops but definitely not for servers. If anything one can ask why you are against Ubuntu as it is superior to Manjaro for both desktop and server versions.