Issue while Installing on Windows 7. IE 9 or Higher Required

Hi,
I am trying to install the latest Manager Version on Windows 7. I even installed Microsoft .NET Framework 4.5.2. But now its showing the message to install IE 9 or higher version. 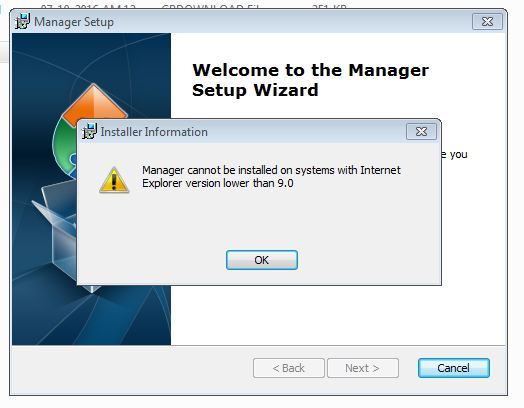 Did you install an IE version of at least 9.0?

Thanks for quick reply.

No, I tried to install IE 9 but i think its not compatible. does it compatible with Windows 7.

Install IE 11 and Microsoft.net 4.6.1 as these are the latest. IE 9 and .net 4.5.2 are quite old. Also run windows update and install any updates required as you may need some windows updates installed to run IE11 or .net etc.

No, I tried to install IE 9 but i think its not compatible. does it compatible with Windows 7.

You can install Internet Explorer 9 on Windows 7 without any issues.

Hi There…I was using Manager on my desktop Windows 7 from last many days… But I my system crashed and we had formatted the system again with Windows 7. Now this problem of IE more than 9 is arising…I am trying to download Windows IE 9 and 10 as well…but unable to do so…

Is there any other way around to resolve this issue.

I really do not want Windows 10…Can’t I use Manager with Windows 7.

If this is not possible…I may Have to move to other software…which will be very sad for me.

Thanks in advance for your replies.

Ie9 and Ie10 are very very old. Windows 7 used those briefly and then went on to use IE11 which was it stayed on for years and never upgraded beyond that version.

However, I would seriously advise that you go with Windows 10. I also was very hesitant to move to Windows 10 having heard of so many problems with W10 and I was also very happy with W7. So I also stayed on W7 far longer than I should have and was very reluctant to upgrade.

However, having moved to W10, I will not go back to W7. W10 is more secure than W7 and more and more software will no longer run on W7 anymore.

I really would recommend that you use Windows 10 - you are just delaying the inevitable as any new laptop you get will not run Windows 7 because the new CPU’s don’t support Windows 7. In addition, you will very soon reach a point where you need to install something to make a program run and whatever the update is, it won’ run on Windows 7. There is no reason to not go to Windows 10 anymore. It is very reliable now.

Can’t I use Manager with Windows 7.

There has been no change, you just need to install Managers minimum requirements. Manager does still work with Windows 7.

I really would recommend that you use Windows 10

Microsoft has monetised their near monopoly of desktop computing. Initially they tried to use their desktop dominance to buy their way into the tablet market (Windows 8).

They have since changed their approach to follow Google’s lead, and instead now sells the windows users (Windows 10 consumer versions).

Windows 10 code is superior to earlier versions in many respects however the legal terms and conditions together with the privacy (to Microsoft) is a massive step backwards.

Unfortunately from a user perspective there is no-longer a choice, use Windows 10 or find non Windows versions of all programs you use and don’t use Windows at all. Which means I reluctantly agree with you @dalacor

[begin rant]
If you really want to fix the problem a broader perspective is required. Starting with; why or more particularly when is capitalism better than socialism? The answer is when true competition exists, the best suppliers are rewarded but more importantly the consumers all win by having better supplies. Unfortunately there is two ways of a supplier competing well, they can be better than their competitors or they can eliminate their competitors. In the longer term the latter works better for the supplier as then they no longer need to compete, they only need to protect their market position (eliminate competition & convince their customers they are getting a good enough deal). Unfortunately the consumers loose as without a comparator consumers can’t tell if they are getting a good deal. In my opinion once off intervention are not an effective means of maintaining competition / effective capitalism because market manipulation by an monopoly progressively increases with market share. So effective control / penalties need to progressively increase with market share (across all industries). Unfortunately governments are unlikely to legislate to ensure effectively capitalism/ competition, as all businesses with market dominance invest heavily in preserving their monopoly or duopoly.
[end rant]