How can I clear Credit Memos from system?

I had a return from a regular customer. they had already paid for the items so i created a Credit Memo. Their next order was for less than the total credit - the sales invoice appropriately deducted what it could and left me with a 0 balance. On their next invoice it deducted the remainder. All well and good and what I expected.
BUT
I now show 2 invoices from that customer as underpaid and the credit memo is still sitting in the credit memo area. Yes, everything balances out to zero but I’d like to clear everything so it shows paid invoices and no outstanding credit. What do I need to do to make that happen?

You say that on the next order after the credit note, the full amount of the sales invoice was deducted, leaving a 0 balance due. That implies that the credit note was not designated for a specific sales invoice. Your description of subsequent behavior is consistent with that, too.

However, the later two invoices now showing as unpaid suggests you did designate the credit note for the first sales invoice, which would now be overpaid. To resolve this conflict, you need to post some screen shots: 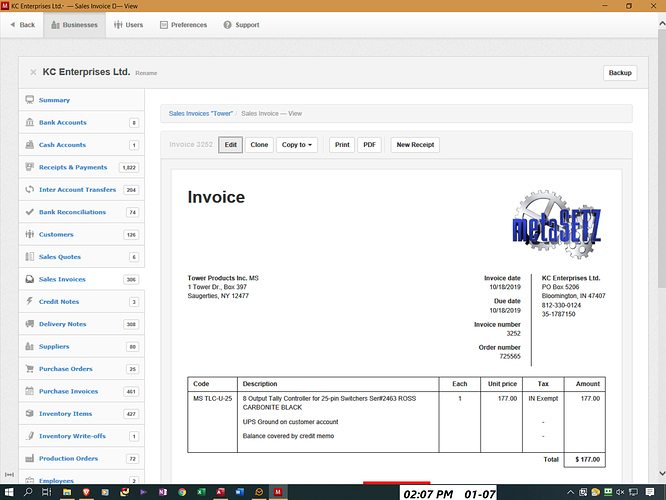 This one did deduct and used the reminder as it should. 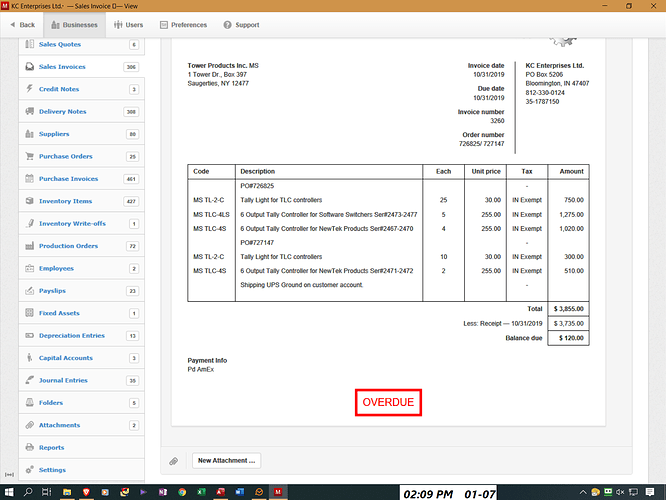 I didn’t choose a single invoice to use for this credit since i didn’t know how or when it would be used. Can you put 2 invoice numbers on the credit? 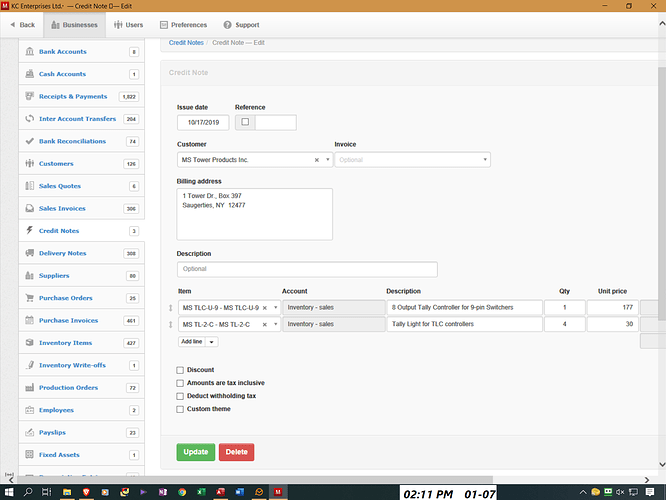 Bizarrely, they don’t show up in my accounts receivable area at all. Is this because I’m always paid immediately for the invoices? I’ve attached the later part of their purchase history from the customers area instead. Everything below the screen grab shows as fully paid as well. 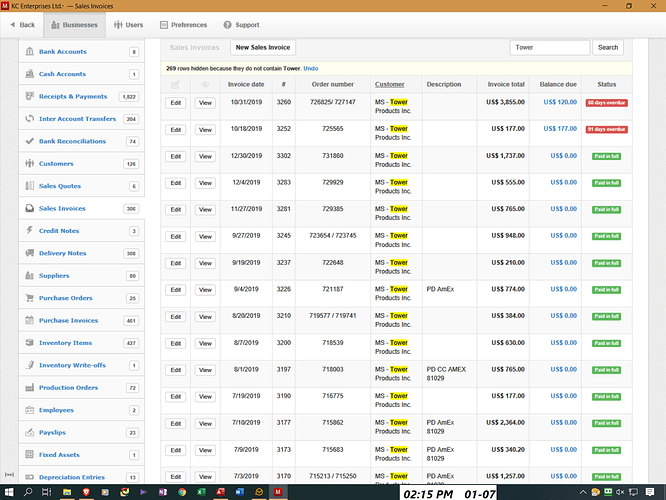 Could this be a problem, in part caused by switching versions of software in between transactions? I just downloaded the latest version today - had been using 19.9 and now am on 19.12.

Oops - they did show up in the AR area just not in alphabetical order so here’s that section.
Tower Products 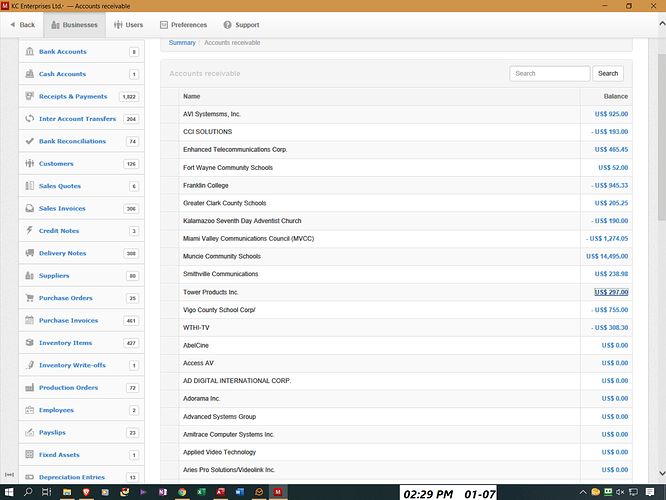 they don’t show up in my accounts receivable area at all. Is this because I’m always paid immediately for the invoices?

No. You were just looking in the wrong place. Transactions display in different order according to context. When you look at the Sales Invoices tab, invoices display according to status, with overdue first. Other places, they display by date.

Could this be a problem, in part caused by switching versions of software in between transactions?

No. There have been no changes affecting this part of the program during that time span.

I am almost certain I know what is happening. But you need to post one more screen shot. When I asked for the drill-down on Accounts receivable, I meant to go all the way. Click on the blue US$297.00 figure under the Balance column for Tower Products Inc. Show the results. Make sure the screen shot goes far enough back in time to pre-date anything having to do with these invoices and credit note. 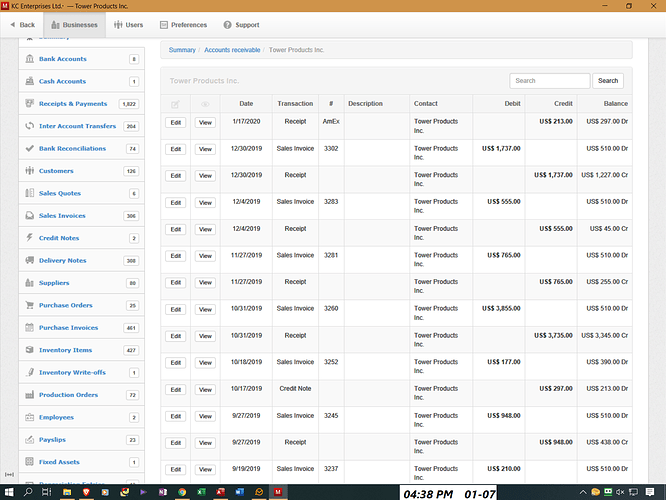 As I thought. The Accounts receivable subsidiary ledger for Tower Products tells the story:

Resolution hinges on identifying why they owed you $510 before you issued the credit note. It looks like your invoices and receipts generally go in lock step, as you mentioned initially. So after every exchange, the account balance should return to zero. Look back in time until you see a point where it did not. You might have made an entry error, forgotten to record a receipt, or something similar.

Yikes! I had found a double invoice earlier for this customer and deleted it and apparently caused the whole problem. Sigh. Count me as another inattentive user. I’m still getting the hang of all the various places I need to check to delete a double entry (invoice, payment, delivery notice).

I feel like I owe you something for acting as an auditor for me. Is there any way I can send appreciation to you outside of just saying ‘thanks’?

Just check the Solution box among the icons below the post.

I feel like I owe you something for acting as an auditor for me.

your invoices and receipts generally go in lock step, … So after every exchange, the account balance should return to zero. Look back in time until you see a point where it did not.

With this valuable tip, it enables you to do most of the auditing yourself. The technique can be used in any of the multiple clearing style accounts in Manager (including each customer, supplier, employee, taxation regimen for which an account had been created).

Note with the higher volume accounts you may need to allow for the difference between when a settling balance is calculated and when it is paid (it would be nice if Manager had the option to sort in that order but in is mostly not that hard to see the pattern when you look).