When using Batch Create for exchange rates in the Settings tab, the program template asks for Date, Currency, and Rate inputs:

But neither 3-letter abbreviations nor full currency descriptions matching those in the in-built list are accepted. For example, a two-currency input: 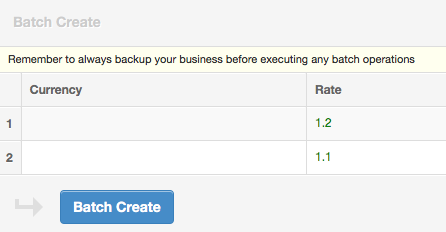 and totally blank entries in the Exchange Rates listing:

Apparently, Manager expects a 32 hex-character designation for what is labeled as the Currency column, like what is shown when using Batch Update:

But the user has no way of generating this ID for a currency, making the Batch Create function useless.

I previously reported the difficulty of using Batch Update without a guide to which currencies matched which hex IDs, but that was deemed not to be a bug.

I don’t consider this to be a bug. It’s “as designed” because there are many batch create operations where 32 hex-character ID is required. For example, when batch creating customers, there is a field for custom control account and that can also accepts 32 hex-character ID. The same goes for inventory items where there is a column for default tax code, tracking code, income account etc.

I agree this needs an improvement but it’s not a bug. For now, the only way to figure out which 32 hex-character ID represents given currency is to create exchange rate manually, do batch update to see what is the currency ID, then use that ID in batch create operation. Is it cumbersome? Yes. But it’s not a bug. So I’m moving it into ideas category.