This will be possible when Multi-step Profit & Loss Statement is implemented. It will allow you to create sub-totals and income/expense groups. I already started working on this so it could appear sometime next month.

Is there an update on this? I need to separate operating from non-operating expenses on my P/L statement.

Yeah, this has been already implemented.

This link doesn’t bring me where I would like to be.
Where exactly can I change the settings in such a way that I can create / see the group-totals.

Hennie where have you been - that feature “Multi-step Profit & Loss Statement” was implemented but has since been upgraded again with the new “Chart of account” under settings, but you need ver 16.1.36 or later to see it.

Within that Chart of Accounts - P&L you can set up exactly what you require without a problem.
You can create groups with titles such as - Income, Cost of Sales, Direct Expenses, Overhead Expenses, Other or Non-operating Income or Other of Non-operating Expenses - the choice is entirely up to you. Just number (code) them in the sequence you want them to list.

Then point each general ledger account to their respective group, then you can create another group called Gross Profit etc and point other groups to it. My groups are below and the income and expenses group point to Gross Profit group to give a sub-total. NOTE that you must click the expenses box if you want that group to deduct otherwise they will add.

The new system is so flexible

The Management summary shows me in the P&L section the group headings in alphabetical order, with no group totals Where do I enter the right codes for such totals and to get the totals presented in an order the way I would like ?
In reports, the P&L doesn’t show me the groups at all, just the general-ledger accounts with the individual balances.
Can you please provide the instructions / guide how to set it up. I’m not afraid for the trial and error method, but it is so time consuming.

Unfortunately there is no documentation on the new chart of accounts scheme. It has been promised, though.

OK - I think I see your problem - using “New Total” instead of “New Group” only - Creating a group heading automatically creates a total for those related accounts, asking for a Group Total just duplicates and adds an additional sub-totalling tier. Manager only allows for 2 tiers of totalling and it sounds as you have 3 or more tiers which means Manager strips out any middle tiers so in the P&L report you only see the first and last tier.

Now your chart of accounts sounds very similar to one of my enterprises and I don’t use “New Total” at all only “New Group” - see the samples below - top and bottom of the Chart of Accounts and bottom of the P&L Report, also as I stated previous I point Income & Expenses groups to Gross Profit “group” 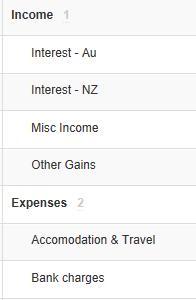 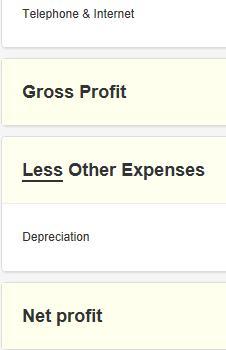 The Net (Nett) Profit is the default Report Total generated by Manager not by the user,
Not that I have used but I think “New Total” is more applicable if you want to sub-total various MV Expense accounts to see Total MV Expenses - but don’t hold me to that.

@Hennie, check the latest version. P&L and balance sheet will show all custom groups created under Chart of Accounts now.

I updated immediately to the latest version and it looks great. Thanks for this improvement.
Keep up the good work and many greetings from the Netherlands.

I have just downloaded the latest version and now the P&L doesn’t present correctly in the Chart of Accounts or the P&L Report as it did previously, The first thing I noticed was that the Income & Expenses groups no longer pointed to the Gross Profit Group as it had been deleted from the Group dropdown dialog box but was still listed on the Chart of Accounts - To correct this I deleted the Gross Profit chart of account and re-created a New Group Gross Profit so the Group dropdown looks like this which is exactly the same as before

I then repointed the Income group to the Gross Profit group as previously set up but it displays wrong. Previous Chart of Accounts layout verses the current layout 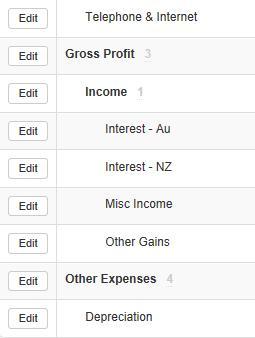 If I also repoint the Expenses group to Gross Profit then the top line of both the Chart of Accounts and P&L Statement will say Gross Profit.

But the P&L is not showing “less” 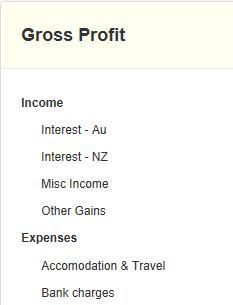 The other self created group Other Expenses doesn’t appear to be affected but then it didn’t have other groups pointed to it. - Hoping that this can be rectified quickly - please

There was a bug a few days ago which allowed you to put a group under “Total”. This never meant to be that way. “Total” is not meant to have sub-groups.

I can see that your Income group is sub-group of Gross Profit. So edit your income group and make sure it’s not under anything.

Hi can anyone help me. Somehow I have changed the income header in the profit and loss account. it now reads uncatorized. The edit button is shaded out so it won’t let me edit.

You will need to post the actual screen shot, @volcanoes, not a transcription of it.

I want my profit and loss statement similar to the format that is in the file I have attached herewith. Please suggest. I read a lot in the forum as well as guide but could not conclude. However I learned to create account,group and new total for the P&L to look similar to the sample I have attached but couldn’t find a way in which I can segregate food,beverages and other details as shown in the sample below.I guess I have to do something while creating sales invoice or creating inventory item.Also let me inform that I am using inventory kit to maintain my inventory. 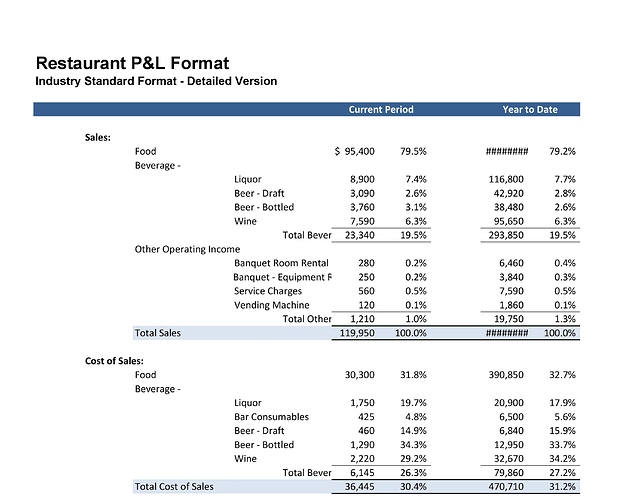 I think I found an answer to my question…Is it ‘control account’ that I should use?

I honestly don’t think this should be hard for you.
Create a group for Food and put the food account under it.
Create a group for Beverages and create a group for other Operating income.
Their totals (groups totals) will be presented.
Introduce a “New Total” when you want to sum things up to that point in the statement (Total Sales for Example).
Control accounts (Sub Accounts) are not available for P/L GL accounts.