I understand why you want the inline email. But I also understand why Lubos wants to remove it is all I am saying. If I was him, I would also be doing the same thing - I just don’t think inline email is a good idea. But the implementation is what I have a problem with.

I speak under correction, but I believe that the internal pdf generator uses apptron or some 3rd party software to generate the pdf. If that is not updated and is left as is today for all time, then in future years that existing apptron coding will have security holes in it that would have been patched if that functionality had been maintained.

Why do you think you update Windows and Office etc through windows update? To address CVE security issues. This requirement will still apply to this 3rd party addon that enables Manager to create pdf’s.

I’m not great with HTML terms but here’s how it’s listed in the Theme:

The file is where it should be and, again, shows up fine in the internal Manager PDF generator but refuses to show up in Print function. I didn’t make note of what version i was using when I noticed the problem - I do know that it worked, then didn’t work, then did work again for a bit and then went back to not working. I assumed it was some sort of bug that was being tweaked the first time it stopped and then started again but, if it was a bug, it appears now to be permanent.

I actually would like the Internal Pdf Generator button removed if it is no longer going to be supported as unsupported software is by definition a security flaw. Software needs to be updated. So it should be removed, but only after users have had time to implement a third party pdf program to replace it.

Do not remove what works for those that have no issues with it (all those that use English and no particular fonts and customizations).

Thank you @Patch for clarifying my query.
I would have thought that if the desktop version cannot use this new method then it would not have been available as a selection. If I hadn’t tested it, I could have been sending out invoices, etc. to clients who would not have been able to view, causing inconvenience to them and an embarrassment to myself.
I am now concerned the way Manager is going - implementing a new process which only works if Manager is operating in a certain way. For those of us, who do not operate that way we are stuck with the existing system which is no longer supported. Not a recommended course of action in my view.

@Pix, you need to read the entire thread. The PDF function works in the desktop edition. And that is what this topic is about. Your issue seems to be about emailing PDFs. That is separate and should not be confused.

Your issue seems to be about emailing PDFs

Manager can only email PDFs by using the internal PDF generator.

The new send a link option doesn’t involve Manager ever creating a PDF document. It relies on the web browser each external party uses to render a web page and convert it to PDF. As a result when a business using Manager sends out documents there will now be a large variation in what that businesses contacts actually see.

For desktop users and businesses who choose not to expose there accounting records to the internet, Manager no longer supports emailing payslips or invoices. Effectively making these products usable and breaking the marketing claim the desktop version is a working version.

Thank you @Tut the whole issue is confusing starting with the original post by @lubos which did not mention that the new email system using a link would not work with the Desktop version or if a server was offline. The only reference to the desktop version was about not be able to confirm whether an email had been read.
As @Patch states above once the internal PDF creator is removed, ( I assume this is the intention of the developer) Manager cannot on its own create PDFs which means Desktop users will need to employ a third party system to create a pdf to send out documents. This in my opinion is a retrograde step.

Im confused.
If I update to the new version will the “old approach” still work in the desktop version?

I downloaded 21.8.57 and found that the ‘old’ email system still works. If this ever gets removed the cost involved in the extra time to print invoices, purchase orders, remittance advices etc. then email via email client will outweigh the cost of subscribing to one of the current other available programs who do not screw things around several times a day.
We keep getting told that custom themes are our responsibility, yet it seems a lot of PDF issues come back to just that. Leaving the ability to email from the program OR send a link would seem to me to be the better option. Just my opinion.

@VACUUMDOG - thanks for checking.
I agree - if the ability to send emails directly from Manager is removed then this is a monumental mistake by the developer.
If it is removed then I will be going elsewhere - I’ll have to start looking at other programs soon.

I was wondering if it’s possible to send emails from client side instead of server side.

When sending an email, the browser would cache the PDF file, send it and then delete it.

It all depends on finding an open source multi-browser email add-in. Even if there isn’t, I don’t think defaulting to user email client is a big deal though.

Internal PDF generator now obsolete
Regarding this topic, when I open the image, it shows TAX INVOICE. M,y business does not use TAX INVOICES but rather INVOICES. Is it possible to remove the word TAX from it?

Your problem is not related. You either have a custom theme, a custom title, or a tax code that modifies the title.

Nothing is mentioned about changing titles, @eko. If someone is seeing a title change spontaneously, they need to illustrate with screen shots.

Sorry wrong link, should have been Added ability to track whether email sent from Manager has been viewed

Below is where @Lubos created email with Tax Invoice on that page. 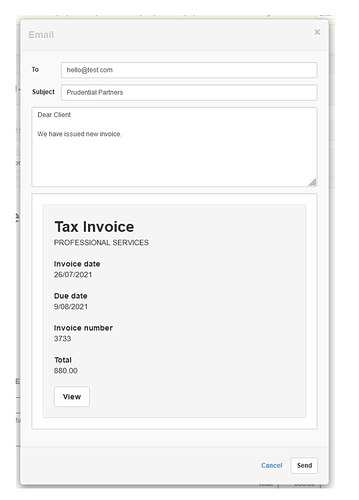 That is an example in which the transaction being emailed had been retitled as Tax Invoice by one of the methods I mentioned. Sending the link does not change the title of a transaction by itself.

Sorry but this is what @Lubos did, he added the word TAX to the email which is what @Mifs was asking about.