I bought some stock from a supplier locally. Because he is not registered with our tax authority I had to deduct 10% withholding tax. I followed the procedure described in the guide for purchase invoices.

Here are all the transactions from my Withholding tax payable account:

image1546×451 35.7 KB
The problematic transactions are those circled in red, where the amount from the invoice and the amount paid are different in the base currency because of currency fluctuations. Journal entry 7 is what I need to remove or correct; it has cleared the balance by allocating it to my Tax expenditure account, which I don’t think is acceptable.

Another potential issue once I get this resolved is how to account for the US$0.11 rounding difference between what was calculated on the purchase invoice and what I paid to the tax authority. We don’t have or use denominations smaller than $1 in US dollars here.

First of all, I believe Manager should be calculating forex gains & losses automatically.

My understanding is that withholding tax is usually applicable only when supplier and customer are in the same country. In this case they will have the same base currency and there won’t be any forex implications.

Are you and the supplier in the same country?

Just to add: In KSA, withholding tax is applicable only on foreign (overseas) service transactions.

@applet, are you sure what you are describing isn’t reverse charged VAT? See Reverse charge VAT (Value Added Tax) | Manager.

@Tut I am working in finance in this region and understand the difference between VAT (reverse charge) & WHT. Refer the attached.

To clarify - there are instances where the same transaction is subject to WHT & RCM under KSA VAT rules. 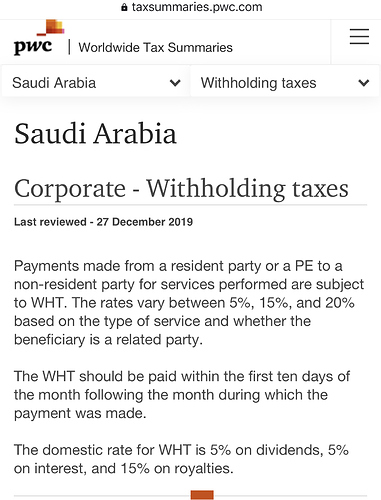 I ask this because in KSA, we pay in the base currency to the tax authorities.

First of all, I believe Manager should be calculating forex gains & losses automatically.

Thanks @lubos. I agree, and recently suggested in another thread that allowing users to manually post to the foreign exchange account manually would compromise the integrity of that account.

We are in the same country. We have had all sorts of changes and chaos in our financial system over the last few years. I won’t try to explain it all, but during the period in question we were allowed to trade in USD and ZWL, but had to remit taxes in the currency of the transaction. So because this invoice was in USD, the withholding tax had to be paid in USD.